What an amazing thing.

Thanks for a great design. I am amazed and delighted with this. The thought that has gone into all the pieces and it’s assembly. Waiting for the parts to move forward. 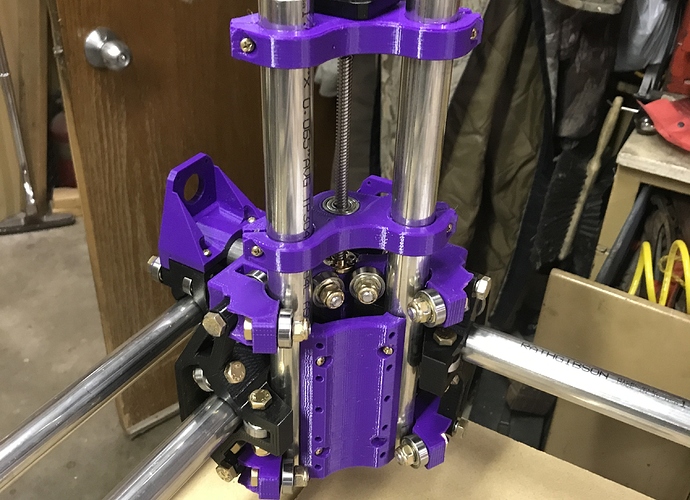 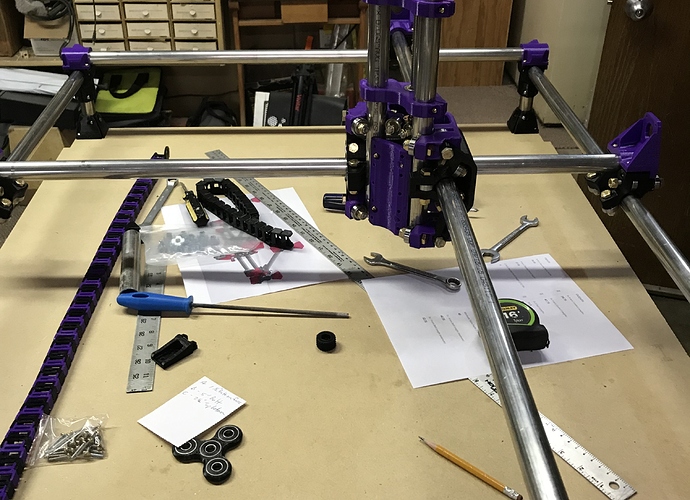 Oh jeez it is horribly clean, eww yuck, get that thang moving so your can get some dirt on it.

Nahhh, it looks pretty good actually. Glad you are enjoying it so far!

Pachinko, 1960’s, originally manual, upgraded to electric, eccentric cam, shooter. The whole mechanism is driven by the weight of a single ball. Small children can be mesmerized for hours and a few adults.

Lowrider2 next. Ordered enough tubing for both. It was cheaper than having them cut it. 40’was < 30’ with a cut fee.

Update time:
Originally assembled 180° off, tore it down and reassembled with home in the bottom left corner. I didn’t like folding the wires folded over so I tied them with nylon upholstery thread and covered them with heat shrink. Clothes pin made handy clamps to keep all the wires aligned. I wanted all the wiring to be inside the footprint of the machine, so I used a tape measure and wire loom. I doubled the tape measure along the long axis up to the pivot point. I use some PVC-E glue between the tapes and heat shrink on the ends to prevent chafing. The corner supports are .080 aluminum slightly wider than the inside diameter of the tubing, I ground minor taper so it would wedge inside the tubing. For my corner supports I modified some turnbuckles so I’m able to level each corner individually. The top of my table is a torsion box, which I assembled upside down on a glass table top. The nifty corner brackets I found at Home Depot. For an extra guide along the wiring I used a couple zip ties pulled them over and use a piece of heat shrink to hold the ends together. It makes the wires lay out across the top of the tubing and not fall into the work area. Where the X axis crosses the Z axis I placed a small piece of Teflon to keep them from wearing on one another. It is not going to be allowed to make dust until I finished the vacuum attachment or move it to the garage. It takes way too long the dust my shop the way it is.

Thanks Again to all.

Disregard the mess in the back ground, it’s “my” mess and I know where everything is. 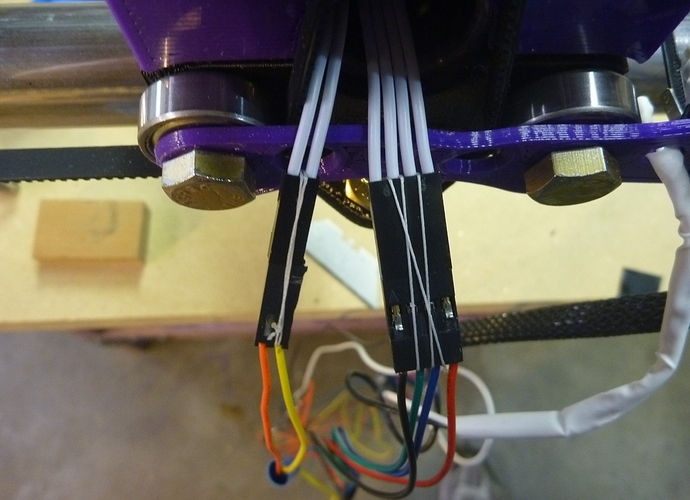 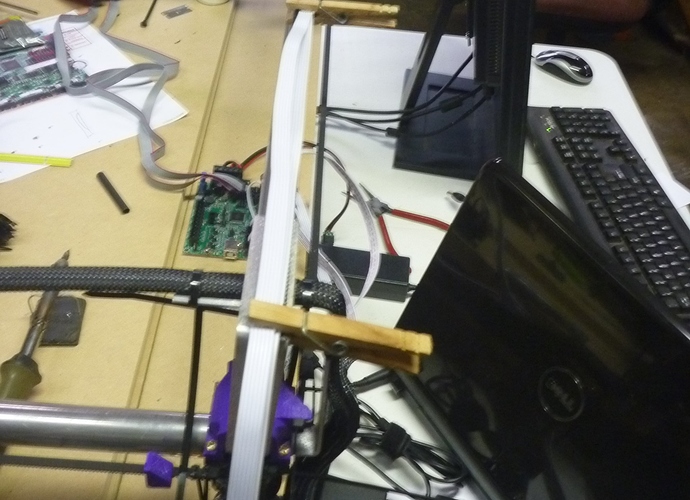 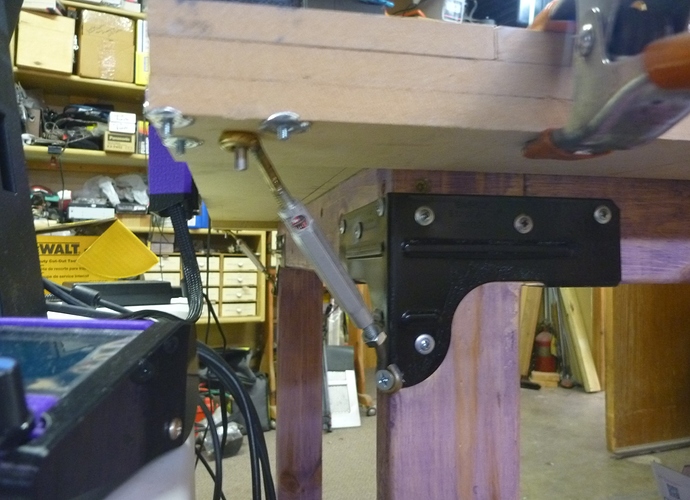 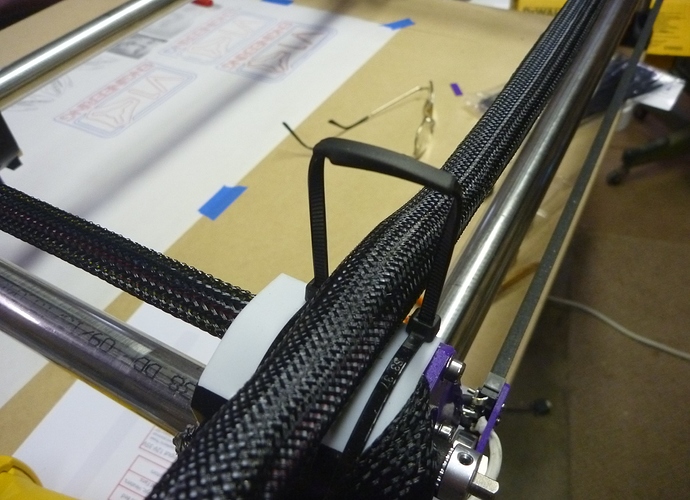 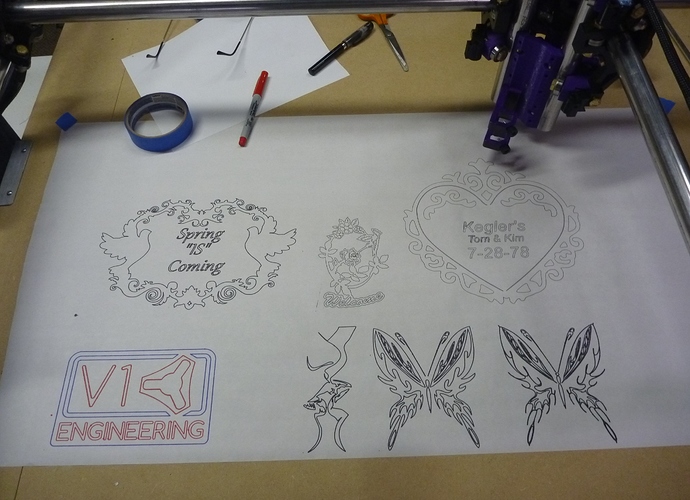 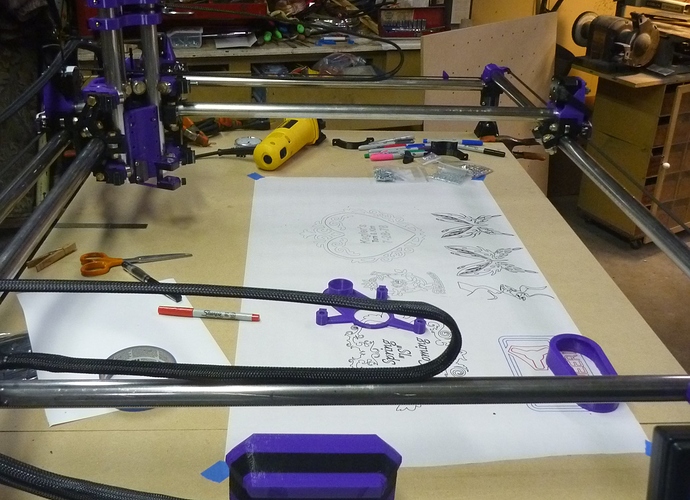 Disregard the mess in the back ground, it’s “my” mess and I know where everything is.

Pretty sure you rank among the cleaner of us…Welcome to the crew!

Love the attention to detail. I can tell we are similar in regards to wire tidiness, I find it to be one of the betters parts of the project. I have the tools to cut and crimp the wires to length but I am a bit to lazy/normal for that much hassle, but I always consider it for a few minutes.

Wiring-a cautionary tale.
I had a fire in my old shop. The culprit was the cord on a multi-outlet strip. It had worked its way out of the notch on the back of the bench and got pinched against the wall. The two wires had gotten close enough together to cause an arc, but not a short. The fire marshal said, to the breaker it would look like an electric motor. The fire was contained to the workbench and the shelf above it. But the fire had gotten so hot in a short amount of time that it kicked the furnace fan on and pumped smoke throughout the rest of the building. The shelf above was full of plastic and glues of various assortments. And that plastic vapor had stuck everything in the building. $35,000 and four months later, I was back in business.

The fire was discovered by accident, my wife and son had stopped see if I had enough oil change oil in the car. Fire department was there within minutes. The fire marshal had also stated that the fire was probably just moments from being totally engulfed.

My new workbench is a 5’ x 7’ gobar deck built out 2 x 3 rectangular steel, completely wired with romex and flexible conduit.

Learn from the mistakes of others, because you won’t live long enough to make them all your self.

Oh my goodness, That is hard to hear. I am glad everyone is safe and it was not a total loss, but jeez that is sooooo close.

Something to do while I wait for my pointy things show up.

I like when both kids are working, I can go take a nap. 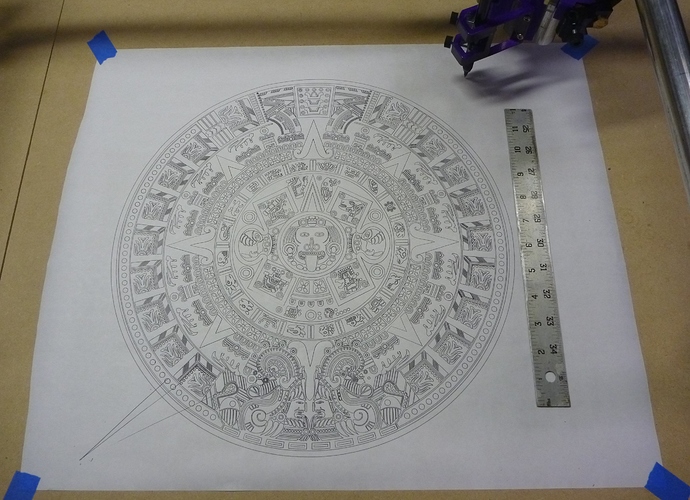 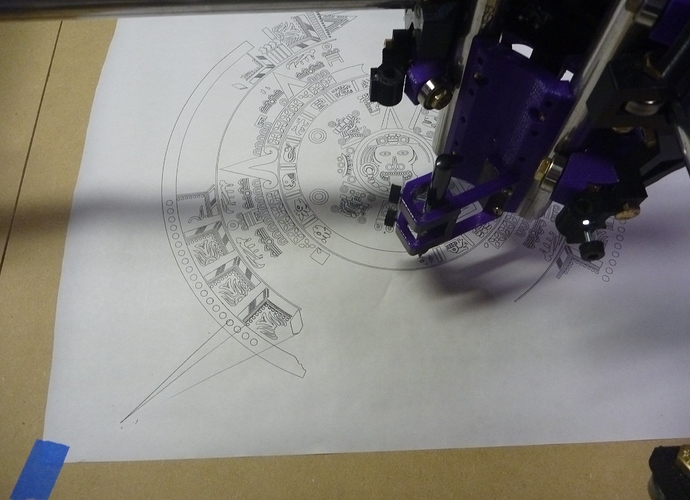 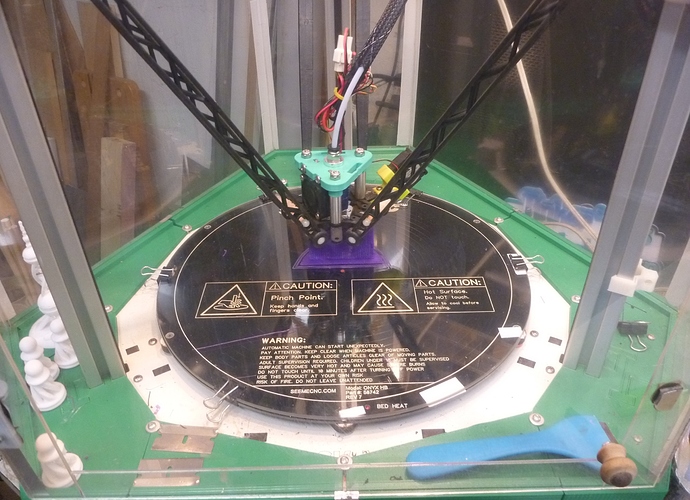 Nice! My first plot was the same thing! Yours came out way better. 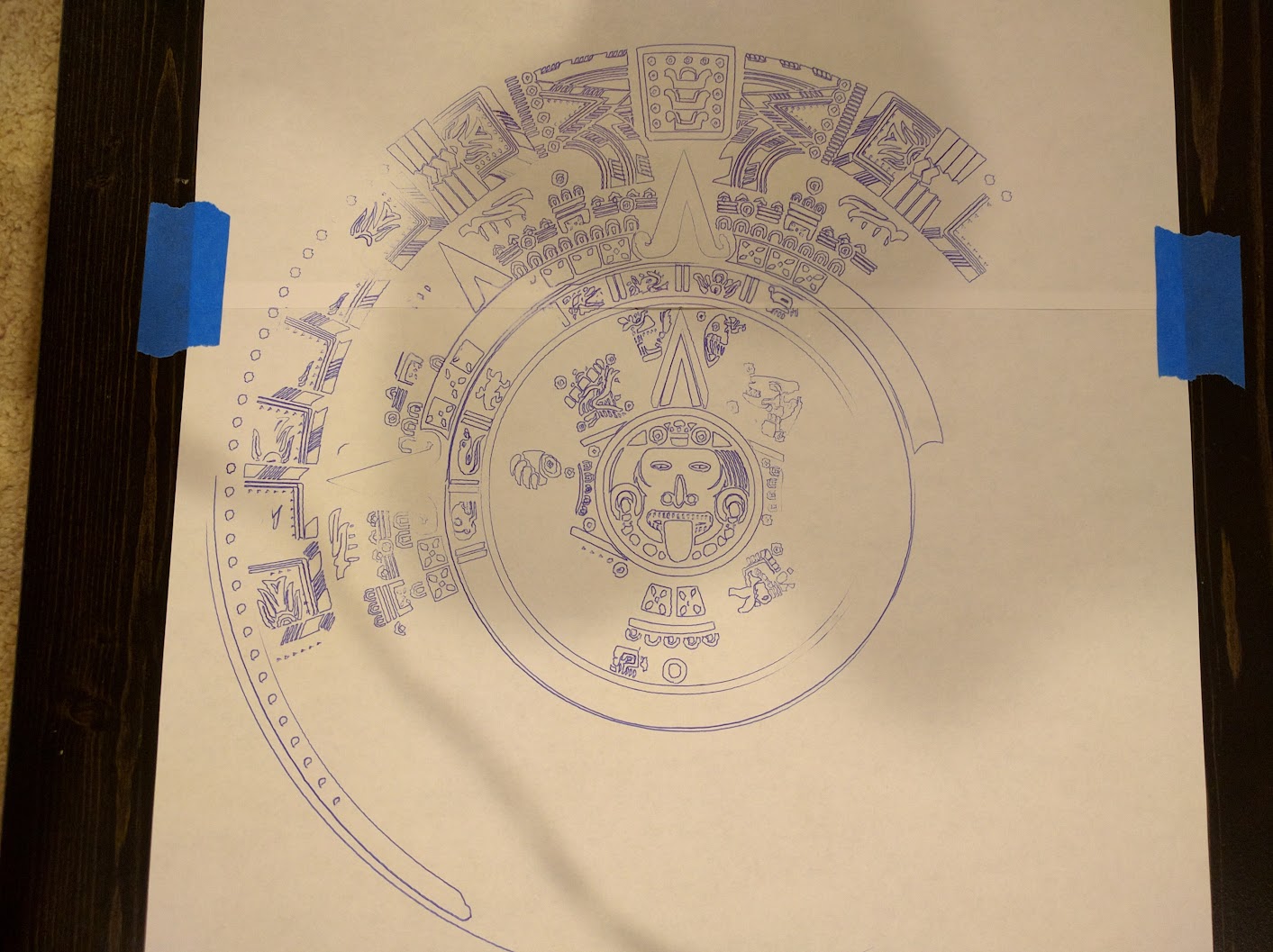 Not my first plot. I’m still deciding if I want Estlcam or not. Finally found the “Select All” or “Create objects automatically”. Last of the vacuum parts should be printed by tomorrow. Pointing things are at the mercy of USPS.

What brand PLA did you use?

That purple is awesome…

Cheap PLA from “2011io000oi” on eBay. Prints well, sometimes not the fastest shipping. One of the Black rolls had about 3 ft. brittle filament, the rest of the roll was fine.

Again, Thanks to Ryan for a great design. Ryan, fear not, your machine and business are evolving. Reading through your posts, at times you may seem overwhelmed, but it is all an investment. Many people comment on my shop, they do not understand that it is 30+ years to get to this point.

Hope the pictures help others with their setups.

I used a paint brush for the dust shoe. I separated layers with strips of aluminum, then glued a strip of cloth to each layer before cutting the brush into pieces. 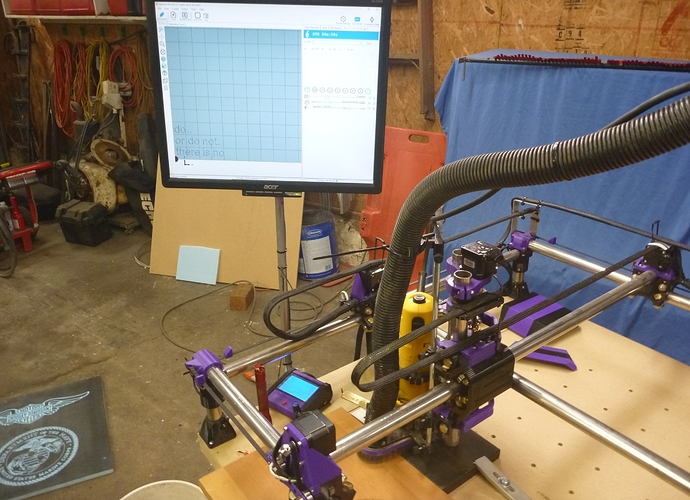 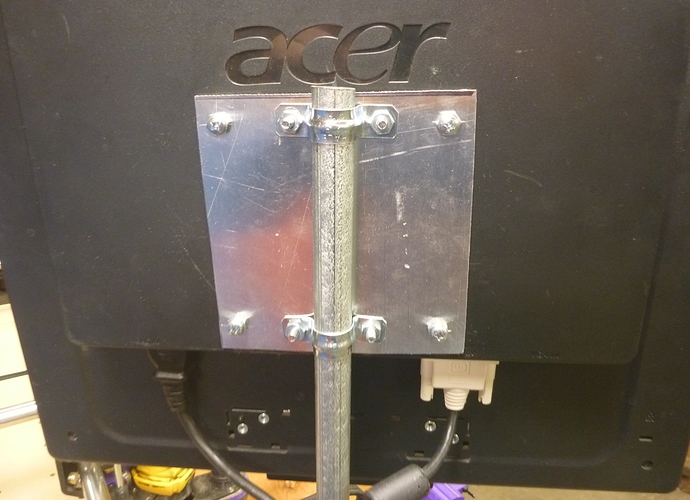 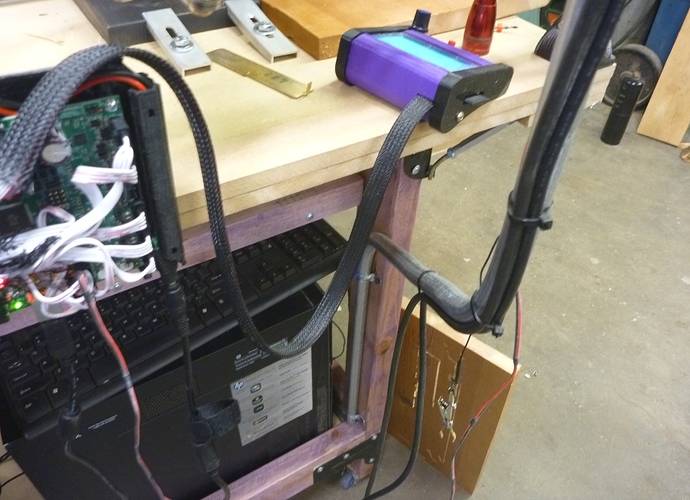 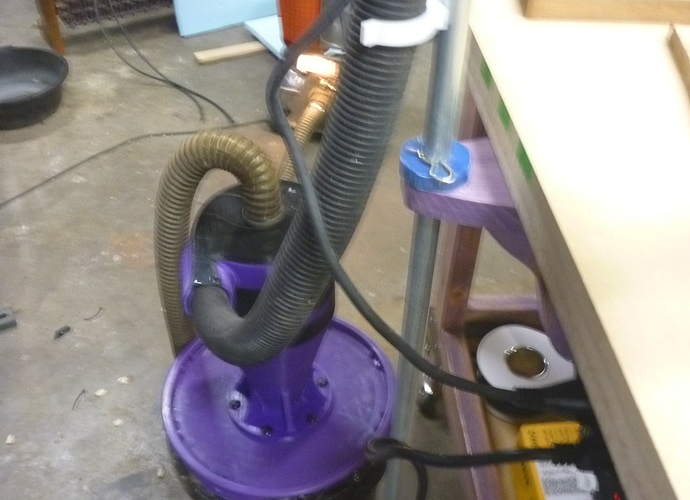 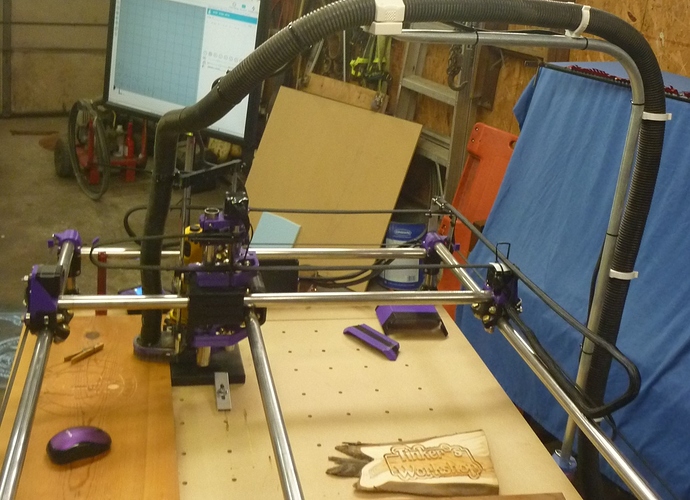 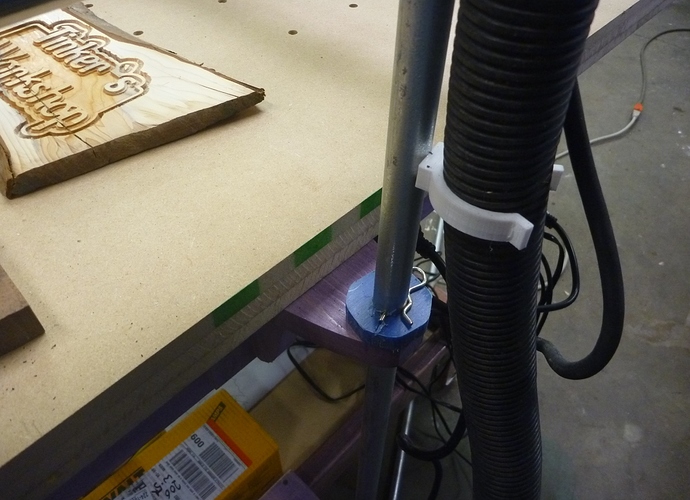 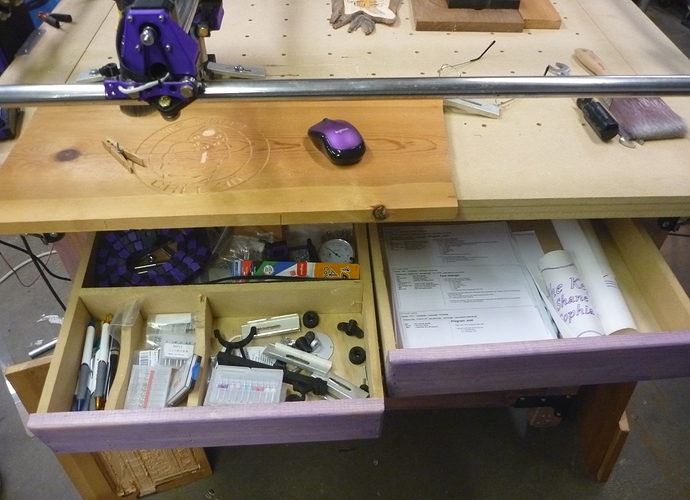 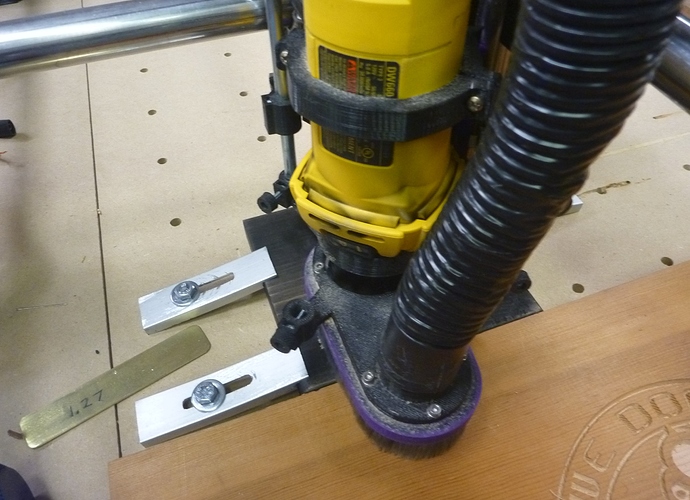 Also, for the new people, the forum is very inclusive. Learn how to the search button!!!

Thanks for the encouragement. It does get overwhelming at times I did have that feeling under control but the move (and drama from it) set me back a bit. Things are finally back to normal (but better).

Your build is pretty inspiring, You can tell you have fun making it yours without making uninformed decisions. Nice!

I had a fire in my old shop. The culprit was the cord on a multi-outlet strip. It had worked its way out of the notch on the back of the bench and got pinched against the wall. The two wires had gotten close enough together to cause an arc, but not a short. The fire marshal said, to the breaker it would look like an electric motor.
My new workbench is a 5′ x 7′ gobar deck built out 2 x 3 rectangular steel, completely wired with romex and flexible conduit.

Learn from the mistakes of others, because you won’t live long enough to make them all your self.

…I realize I’m responding to a somewhat old post, but figured it would be a good thing to remind people about!

This is A REALLY GOOD THING to remind guys in this hobby/line of work about – we tend to use a lot of extension cords.

Extension cords are a major cause of house fires… often from being pinched behind furniture. INSPECT your extension cords and THROW THEM OUT if damaged! (make sure you irreversibly destroy them first)… Try not to use them in permanent situations, and make sure they’re well protected before ‘forgetting about them’

An Arc-fault protected circuit might have saved you in this instance, they are becoming more common as new homes are mandating them on more and more circuits, specifically bedrooms… Probably not the best idea to arc fault protect the work bench because as your fire marshall pointed out – electric motors (routers, vacuums, saws, corded drills) all have brushes inside them that produce tiny arcs which appear similar to an arc fault… which could lead to nuisance tripping. They are better than they used to be, but can still be troublesome with arc producing equipment.

Loose connections (a really loose plug that wants to fall out after plugging it in, or bad connection somewhere else in the circuit) are something else that causes fires all the time.

Full enclosure, 1/4 underlayment. I planed some 1x2’s just to clean them up. Cut a rabbit to inlet 1/4" plywood. Carpet pad. I used piano hinges on the door. Also a couple pieces of 1" x 1/8" flat steel on each side of the glass to keep the flex from breaking the double strength glass.The box attaches to the base and wall, I can roll the MPCNC out from under the box by removing 2 screws.

I posted the modified files in the Remixes. 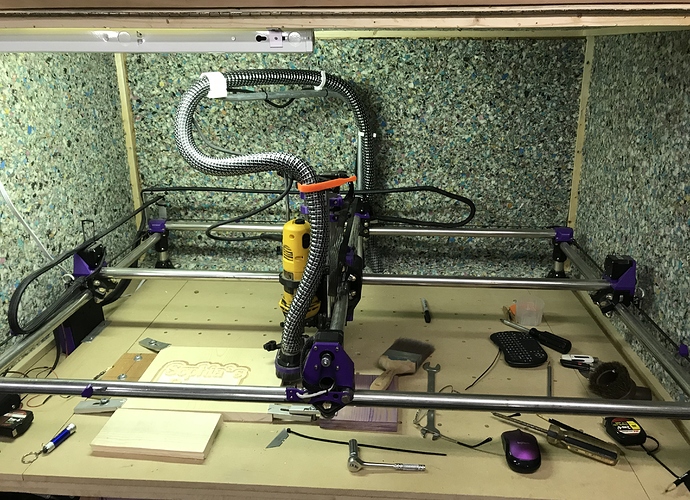 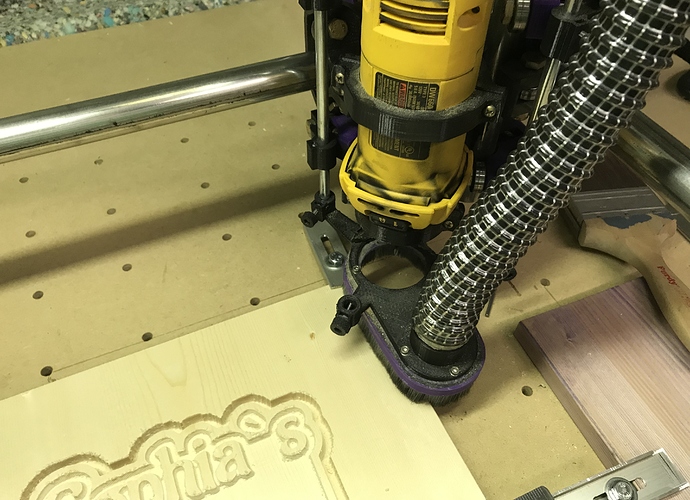 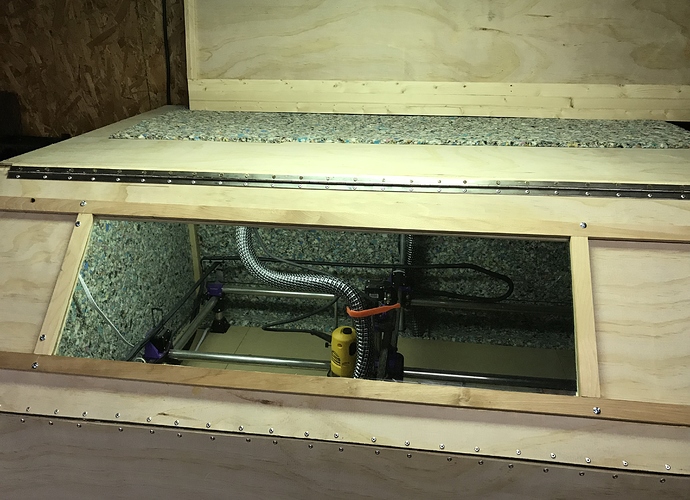 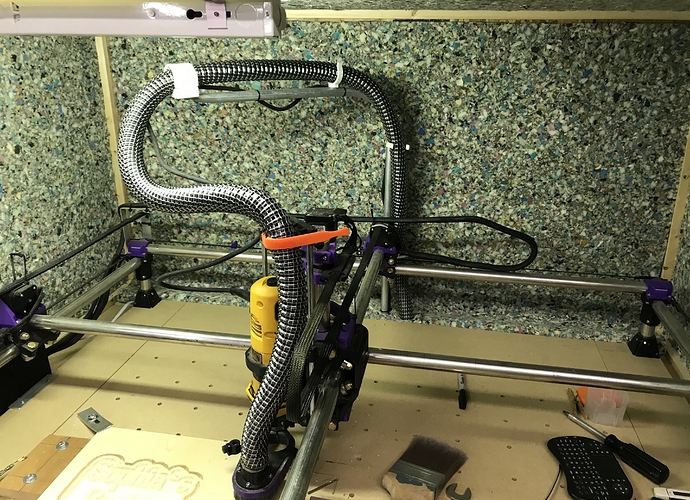