Hello all,
I’m beginning my CNC journey by building the Lowrider v2. Over the past few months I’ve printed all the parts as time allows and I finally bit the bullet and ordered the hardware from V1.

My build is going to be a little different than some, but should be pretty vanilla in a lot of ways. I hope to keep this thread organized with my progress and document some of the pitfalls I’ve worked through.

Ryan was sold out of the SKR 1.2 when I wanted to order, so I sourced mine from Amazon and along with a TFT35 v3.0. First mistake right there, I didn’t realize that there is both a TFT35 v3.0 e3 and a non-e3 version. There isn’t much difference between the two, just the location of the control knob. It did mean that I needed to source a new case for the controller. 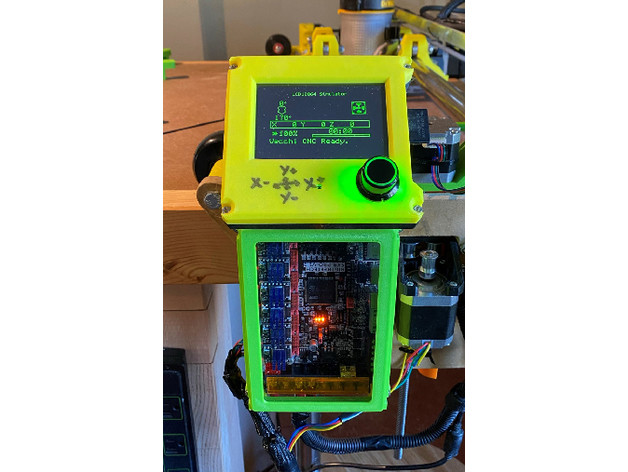 Update 4/18/21 - Added new SKR back case for mounting the TFT directly to the top. Eliminates cable strain from cabling bracket mount or for those whose bracket isn't inline with the mounting area. Added new bumper style SKR front case. Now you can... 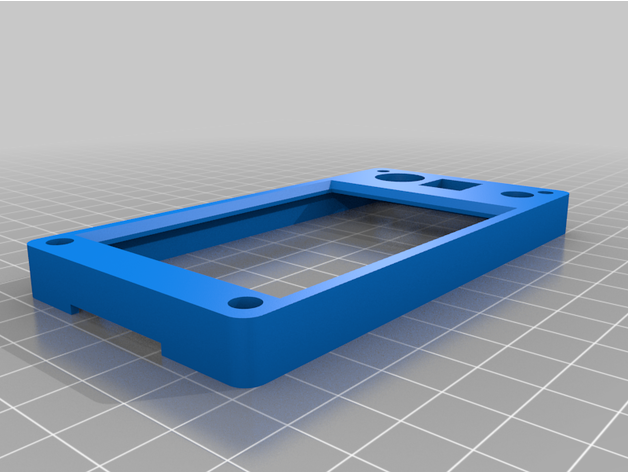 5/14/20: Re-uploaded TFT35_BottomNew.stl as well as IPT and STEP file with an inset for the M2.5 screw to fit flush with the case. Originally uploaded the wrong file, sorry! Makes for a much more streamlined / finished look For the Ender 5 Plus / ...

and remixed it to match the mounting holes for the SKR’s case as well as to use 3mm hardware. 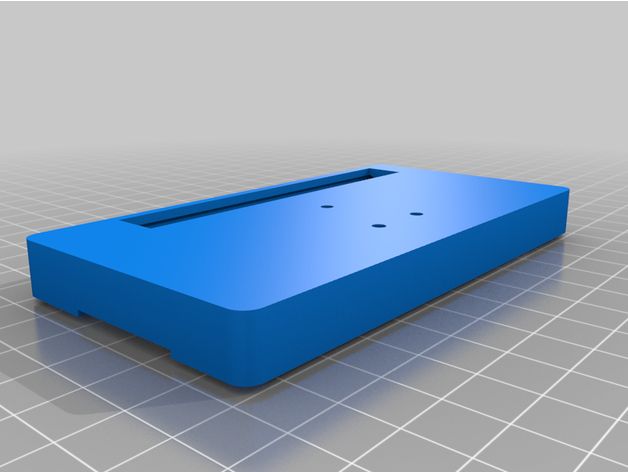 This is a modification of the back case for a TFT35 v3.0. Please note, not the e3 version. I remixed this to work with the SKR 1.2 Pro case seen here:https://www.thingiverse.com/thing:4700462

With that all sorted I started in on some other organization. I designed a holder for the AC adapter that V1 sent: 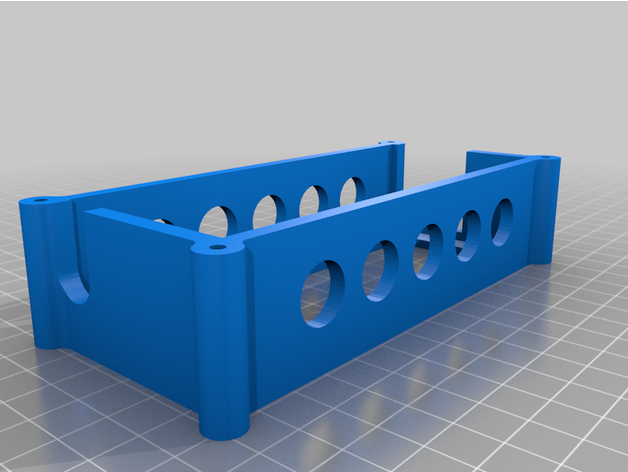 Case to hold the power brick that I bought from V1engineering.com

I plan to mount that on one of the Y plates along with the control board and TFT.

Got the whole thing assembled and sitting on my workbench now. Still have to make a new table top for it and connect all the belts. 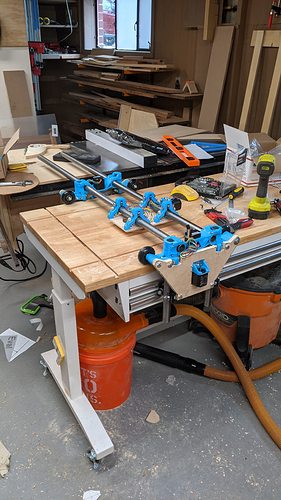 Hope my SKR case works for you! Build is on the right track by going vanilla and then modifying to your needs. If your table is tried-and-true (literally) you’ll but cutting in no time.

Guys I did a thing: 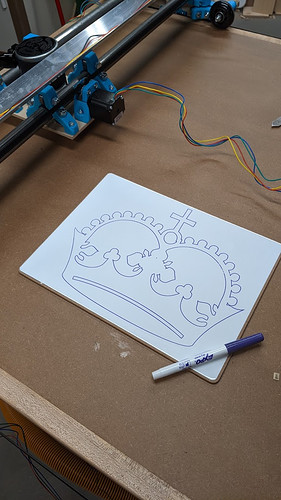 If you look at the top loop just underneath the cross you can see where my lines didn’t meet up. Does that mean that the gantry wasn’t square?

That could just be flex in the pen, depending on how rigid the pen mount was. Given that it looks the same on both “closings” I don’t think it was the workpiece moving.

Step back and pat yourself on the back, you built a thing that did a thing, and pretty well by the looks of it.

Good luck and welcome to the club.

Welp I broke one of the belt mounts and my printer is occupied for the next 24 hours. Got some good updates coming and troubles to share.

I think you built that on the same table I am using as my desk!

That could just be flex in the pen, depending on how rigid the pen mount was.

I am by far an expert, but I also believe it could be caused due to pen mount.
Another example of it is visible in your picture; it´s not symmetrical 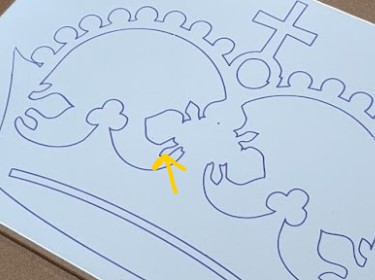 Thanks y’all. I’ll run a few more tests and then try cutting some stuff

Welp I solved problem 1, which was my drawing accuracy. Had a loose grub screw on one y stepper. 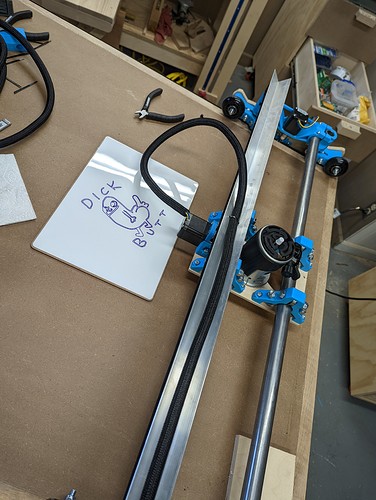 Problem 2 that my z couplers are really cocked when the gantry is fully lowered. It seems to work fine, but I don’t want to be blowing through couplers 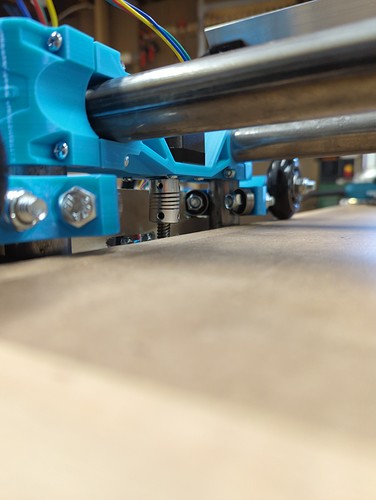 EDIT: I just re-read and took a closer look at your picture, as I understand now, the problem is not your coupler being “extended”, but rather the fact that the motor shaft is significantly mis-aligned with the leadscrew holder on the Y axis.
The problem is more visible when the gantry is lowered because the angle they form goes up
It seems that your XY center piece is reversed (see https://www.v1engineering.com/wp-content/uploads/2018/07/00100dPORTRAIT_00100_BURST20180719181652856_COVER.jpg, the “closed” side faces the table, and motor is on the outside ). I think that’s the root of your problem

The Z coupler should only be “extended” by the lead screw if you’re trying to lower the gantry when it’s already at minimum
That’s not the case in your picture, which is strange…
Is anything binding, preventing the gantry from going down? Or is it just that the coupler already suffered from extension in a previous episode?

In any case, here’s the link to a “coupler saver” that might help with the first “oopsies” 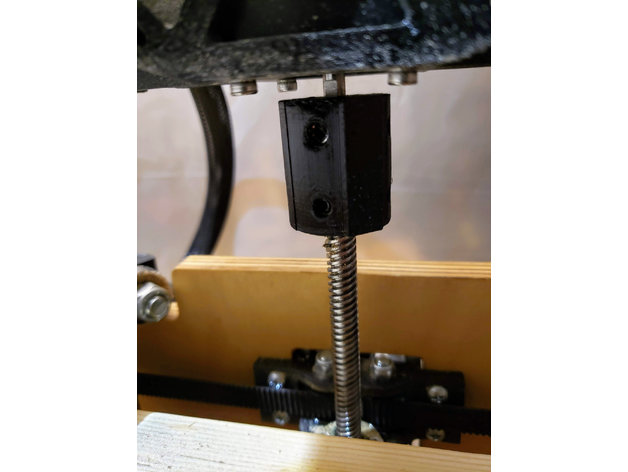 Lowrider has a heavy gantry and thus has no need to support spring couplers from the bottom under normal operations. However it's easy to accidentally over-stretch the couplers when jogging the machine around. These 3D printed sleeves will protect...

The two parts just disengage if you lower the gantry too much…
Also it’s usefull if you want to be able to quickly disassemble the Y plates from the gantry (eg. for storage) as long as you can disconnect the wires…
I think Ryan’s recommanded against using this kind of couplers though, can’t remember why…

That’s not the case in your picture, which is strange…
Is anything binding, preventing the gantry from going down?

Something seems to block the Z from going down, indeed!
I believe you should try and loosen the leadscrews, lower the Z axis completely and mount them again.

Somewhere in the FAQ there was a mentioning that you should stretch the coupler a bit. TBH I didn´t do this, the leadscrew and stepper-shaft just touch, so the coupler isn´t stretched (but in that way that you can not compress it neither!). I have no issues with this. To be correct; I already tried to lowed to Z further then it can go, so I overstretched the couplers many times now without any issue. The couplers are still in great shape.

I would be afraid though that those solid couplers might do more harm in such situation.

Well in fact, they’re neither solid or fixed

The red part is a bit “gummy” and will allow a bit of flex
The two aluminium parts are just fitted one in another without anything else holding them together, so if your gantry is set to the minimum (or stuck against your workpiece) and you try to lower it, the lead screw will just pull the coupler appart, separating both halves and disengaging the gantry

The cutting tool won’t be “forced” into the workpiece by anything else then the weight of the gantry (and that’s already quite some force)
On the other hand, if one sees the leadscrew “pulling down” the gantry as a benefit (eg. for drinving the tool straight down hard into the workpiece), the “classic” couplers won’t do either (they will only stretch and break)

The couplers I think should be absolutely avoided are these solid ones: 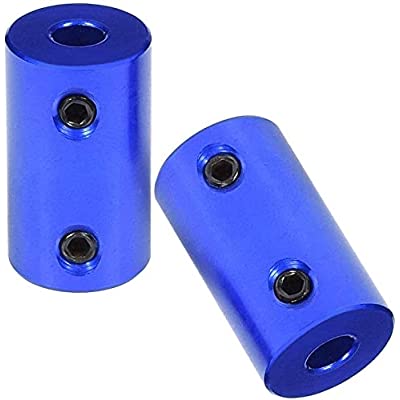 Not sure about this style of coupler either… 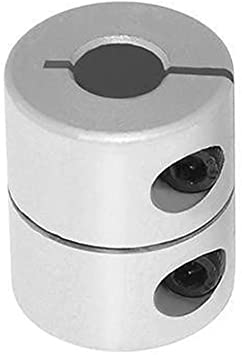 Good catch on the XY bring reversed! I can’t believe I didn’t catch that.

Maybe Lowrider be can have some idiot proof assembly features.

Maybe Lowrider be can have some idiot proof assembly features.

The next iteration will!

Since I need to flip the XZ mains (which means I need to disassemble practically everything) I decided to recut the flat parts since I have a working CNC. 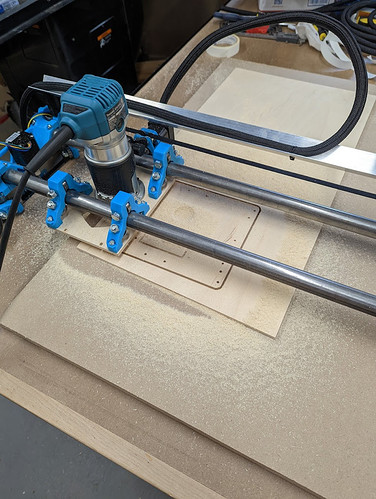 Also I designed a little strain relief bracket for the X-stepper: 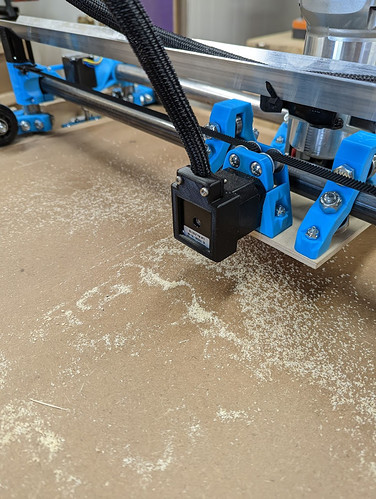 Available here if anyone wants the file: 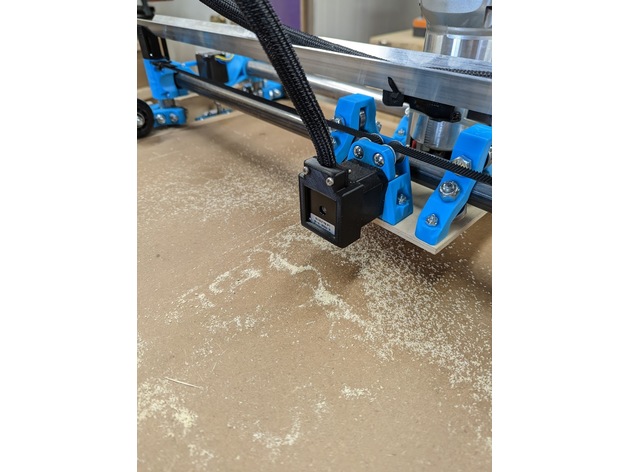 Friction fit on a NEMA 17 stepper motor. I used it to give the wires on my Lowrider 2 some support. Assembles using 2xM3 screws and 2x nuts. 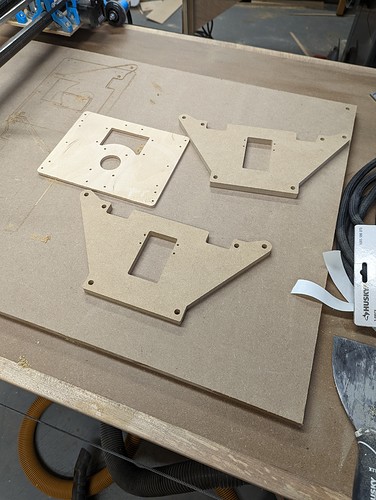 99% satisfied so far, but did have one failed cut: 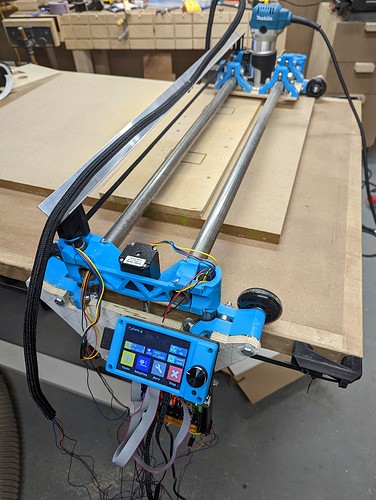 We are trying to figure out what that is, but please use the Malin side for running jobs, it is flawless.

Has anyone hooked up something like an Xbox controller? Would be fun for positioning.

You can use it all you want just run jobs from the marlin side until we figure out what is wrong with the tft. It only takes 3 seconds to switch sides.

Yup you can use joypads in several ways.