The annoying performance and lack of functions at thingiverse comes up once in a while here on the forum. Prusaprinters.com have been mentioned as an alternative, and Ryan’s got the designs there as well. Now they have rebranded to “printables.com”, to show a more open approach towards other printers and communities than prusa! I’m very happy with their decision, and I hope that the site will continue to grow! It’s super fast and user friendly, and you can even get filament for free if you contribute actively. (yeah, I know - the gamification of everything might be a little problematic, but I’m as long as the site works well)

That’s great… Thingiverse seemed to really tank when MakerBot was sold. So hopefully this is legitimately independent.

I also hope they stop pushing for sharing gcode files for prusa printers.

I also hope they stop pushing for sharing gcode files for prusa printers.

Yeah… the gcode thing is somehow unsettling. I think they want to make it as straigth forward as possible, but it certainly has some fundamental dangers to it.

I would hope the prusa firmware wouldn’t allow funky gcode to run.

I like the fact that they allow you to upload the gcode and have the metadata pulled out of it. Print time, material usage etc. Its a nice feature. But yeah I don’t ever use someone elses Gcode. I have used their 3MF files with all of their custom print settings though.

I don’t mind if people want to share it. But I have spent a lot of hours on my slicer settings. I don’t want to print with your settings. I need a stl.

I don’t think I’ve ever seen something that was just gcode.

I’ll have to check it out. Thingiverse reminds me of the good ole days of the web. It’s all there but good luck finding it!

Here you go Barry! To be fair to Prusa - this is their gcode tweaked to suit each particular machine, and it is from the “factory”.
I’ve seen a couple of others try to do the same - but that’s not going to happen!

I would hope the prusa firmware wouldn’t allow funky gcode to run. I’m a bit of a Printables fanboy.

FULL DISCLOSURE: I have earned almost three rolls of filament thus far, which is amazing - I mostly use Prusa filament anyway and it’s hellishly expensive to get to Australia. (Even at at 30% real cost premium it’s still the easiest I’ve found to get consistently great results and I don’t use so much that it’s going to send me broke.)

On Gcode: I agree with everything above - it’s arguably useful to see timing, filament used etc, but that depends entirely on the size of the model and skill of the slicer user. One of my first downloads, before I could draw anything myself was a canister for dessicant. I was too dubious to use the supplied gcode and learning to use Prusa Slicer at the time, sliced it in standard settings to discover that I’d saved 30% of print time over the downloadable gcode.

The Author of the file ran a professional design company, and was astonished and adopted “my” gcode!
In a small way - Prusa’s “Level system” helps iron that out - a person on “level 20” has been around a lot longer than one on “level 4” - however anyone could also change all gcode to RickRoll or worse!

I have numbers of models with colour changes, or inserts built in, and now prefer to include .3mf files to give people who don’t know how to do that a fighting chance.

I like that files of almost any kind can be provided.
WIFI cable eliminator 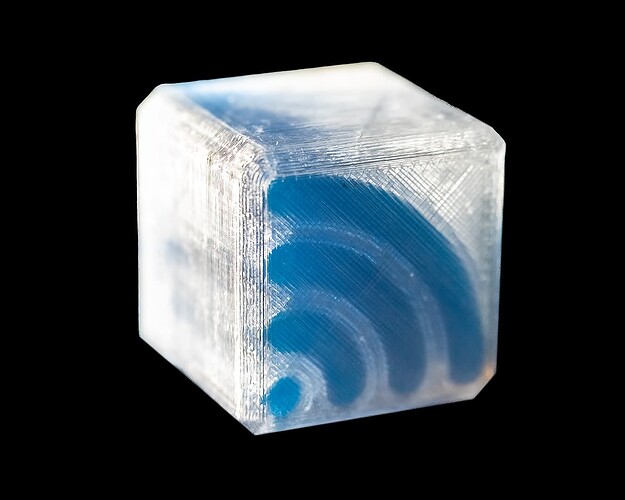 I haven’t published a lot of models lately, so I haven’t cared too much, but with this change in branding, I think it’s finally time to jump ship. Do they still have that feature where you can bulk import from TV?

Do they still have that feature where you can bulk import from TV?

So hopefully this is legitimately independent.

That’s an interesting observation and I’ve seen interviews with Josef Prusa who states that is his intent - HOWEVER - he’s paying for the whole thing, is giving away his own product and has the tiniest shop link in the header without any really overt advertising.

Clearly the intent is to sell Prusa product to pay for it all - and that’s fair enough. I have no understanding of how that can work, but hope they can keep it up.

I think their investment in PrusaSlicer and their determination to keep that available to all is a clear indication of intent on their part.

I know that road paved with good intent well enough, but while they are acting on their intent I’m happy to support them.

Prusa is still a leading manufacturer for 3D printers, so anything that makes them more accessible is going to be good for business, I guess. Might be some ad revenue going into it. Giving away “free” product is often good advertisement for the product, too, particularly if it’s good product. I do hear lots of people like the consistency and printability of the Prusa filament, but I’ve never sprung the $$ for it myself.

I wonder how the 3D printer landscape is going to change, since Amazon seems to be breaking into the business. There have been a number of articles I’ve seen on Amazon banning 3D printer sales, but seem to be “non-branded” so that might not apply to Crealty or Prusa for that matter.

There are multiple “junk” printers out there and Prusa doesn’t have any resellers or sell via Amazon - often what you see on Amazon called “Prusa” is a clone - one of the perils of being committed to open source.

I’ve used a few “lesser” filaments but you’ve seen pictures of my prints - I just can’t get the consistency that I get by paying the big bucks. The situation might be different in Nth America - but here local delivery of a quality filament is (AUD $10.00) give or take and the filament around ($40/kg) so Prusament works out about the same delivered, and I expect there’s a big advantage to be had when the company that makes the filament writes the gcode and everything is tuned to the machine.

Cheap stuff can be had for $30. I have ten spools in stock bought over two years , so the premium is not significant over time - I could have saved $20.00 on filament building the LR2 but I reckon I got $500 worth of value with a machine made from near-perfect prints. For now I’d rather be testing my design skills than fiddling with printer settings.

I’m the first to admit my logic isn’t for everyone, so do what you like doing - that’s the point of having a hobby!

No doubt the site enabled a lot of 3D printing. It also probably gives then a lot of social credit. Those aren’t nothing. But ultimately, the money comes from selling printers and printer accessories. This entire site is an ad for prusa (it certainly was until they renamed it).

Thingiverse left so much room in for a good competitor. I don’t think they want to succeed. The one thing TV has going for it is the number of things. They have always had 10-100x more models than anyone else. But that is changing. For one thing, many of the models on TV are getting old now. For old fads, or connecting to old technology, or designed to be printed on old printers.

I think this will really shift things away from TV. I just got we aren’t having the same conversation in 5 years about printables.

It’s inevitable that this conversation will be ongoing.
Although there’s a “horses for courses” sort of divide happening at the moment that’s interesting to watch, with some model sites heavily biased towards “objects of art” if plastic vases and models of some obscure marvel character are your thing and the more tech-centric for those who need yet another shelf bracket.

PrusaPrinters was very tech heavy until recently, with a fairly high standard of model, but the recent push in their competitions is certainly bringing a broader audience.

I don’t think there’s a one size fits all model at the moment. There’s a difference between those who want to make a living from selling their talent, and those of us who are simply happy and a bit grateful if someone finds one of their models useful or intriguing enough to download.

Beyond the next five years, I’ll be grateful if I can still sit at a computer!

There have been a number of articles I’ve seen on Amazon banning 3D printer sales, but

Less than 2 years ago I spoke face to face with a Buyer from Amazon about 3D printers. He said they were the #1 returned item. Not everyone is cut out to own a 3D printer and the cheap ones need a lot of support. So Amazon had lost a lot of money with them.

Even if it were just for parts.

I prefer the Prusa owned printables.com-model over a ad-heavy social network kind of platform that monetize on selling user data… or those confusing freemium services. At least the Prusa approach is honest and open. And as long as the platform works well, I’m all happy!