leadscrews rotate super easily and even the slightest vibration (or sometimes just touching the beam with my hand) will cause the beam to drop down when the steppers are not engaged.

@karolis, seen this thread Nema17 torque question - #15 by jeffeb3 ? Some folks use different lead of thread from the default 8mm, sacrificing Z speed for increased force that also comes with reduced free motion when steppers not engaged.

Thanks for the tip @aaronse, no I haven’t seen that thread before. It is difficult to say whether it would be beneficial for me to use 1 start / 2 start threads, as I still don’t know what Z speed I will need in the end. Since I’m milling large blocks of soft material, I plan to run x/y planes fast (even considered using 20T instead of 16T pulleys), but Z speed is probably not so critical.

I was also wondering whether spring-loaded anti-backlash nuts would increase the friction a bit and prevent the spindle from crashing.

What are the steppers rated at and what are your drivers set at? There is a huge difference in the driver current v. stepper.

The steppers are 59Ncm. The drivers are 2.5A if I am not mistaken and I adjusted the potentiometers with a multimeter, don’t remember exact values as it was a while ago when I was building another cnc.

My mistake. That is to be expected. I end my jobs at Z positive steppers stay powered (with a pause at the end so they do not power off), to clear the workpiece and have a gcode saved on the card called “park”. It homes to ZMAX, Then X and Y, after that it drives down to Z min and powers down. So it is parking the head at Z min and it has no dropping left to do. You can do all that in your ending G code, but I prefer to have the safety of my working coordinates being saved in case I made a mistake and need to rework anything on a project and gives me time to clear the parking spot if needed.

These add friction all the time though. So it can make lifting the router harder (which can lead to skipping steps).

A 1-start leadscrew and a 24V PSU (more voltage increases the top speed) is a decent alternative. But parking at a spot where it doesn’t matter is free.

That is another question I had for a while: why does v1 engineering recommend 12V power supplies, when most of the stepper motors perform better with 24V or higher voltage?

Enertia most likely. That’s what we started with.

24V cost more and our use case does not benefit from them. The only thing we lose out on a bit is super fast travel moves. I do not like slinging a router around any faster than we currently do.

36V and 48 is even better, but those start to run into other limitations.

Because it’s enough. Also, I’ve never seen Ryan say NOT to use 24V, but the power supplies that he sells in his kits are 12V, and it’s enough. That’s not the weak point of the machine or the electronics at the intended use case and speeds.

I don’t think that Ryan is a fan of “overkill” – Most engineers that I know aren’t. They tend to like proper balance of design, but common points of failure should be easy to diagnose and change out.

12V power supplies are both.

24V does provide better high speed performance, and I use them, because I have several already. But at the speeds where I use my machine, there is no measurable benefit. I did some “weight lifting” with my LR2 with a 12V supply and a 24V supply, and the results were that the motors are just as capable (at 180mm/min) of lifting weight with a 12V supply as with a 24V supply. It was after about 600mm/min that I started seeing the 24V make a difference in the amount of weight that the LR2 could lift.

I remember Ryan saying that the price difference is minimal, and that he’d switch if there was any reason to do so, but so far, the only performance gain is rapid movement.

This is important on a 3Dprinter, which often moves at fairly high speed while in use.

Looks like it is time to do some sort of controlled testing about this. Keeping the current fixed (same amount of heat to dissipate), and then vary the load (static and dynamic), and top speed.

I will start a topic in the Random section to gather some ideas.

C’mon guys, with lawn mowers pushing 60+V, it’s time we kept up with Tim The Toolman Taylor, and started applying the “more power” principal. What’s wrong with a router slinging around at 5,000 IPM?

Back in the day electric lawnmowers were run off an extension cord.

Back in the day… 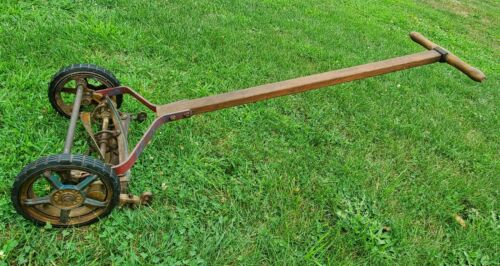 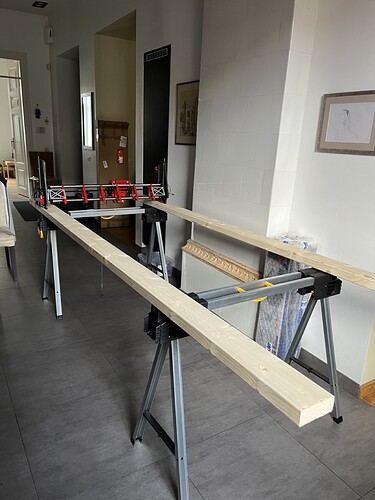 Today I bought a pair Kreg KWS500 saw horses, but they were so wobbly I returned them to the shop and replaced them with these dewalts which were more than 2 times cheaper and a million times more stable.

I need to build the table before finishing the router assembly. The plan is to create a pair of plywood rails and throw some replaceable MDP boards in between them. No idea how long this is going to take…

I remember when we bought our current house on 3/4 acre. Wife went to Home Depot and bought a new reel mower and said “this will help me stay in shape”.
One week later, with the yard half cut despite daily attempts at cutting, we were buying a self propelled corded electric. Now we roll with our Ryobi Battery Powered Lawn Tractor. Can’t say enough about how much we like it! Not looking forward to $800+ in battery change costs next year but no gas, no plugs, no oil, virtually no maintenance, can’t have everything!

We pay a kid to mow our yard.
I don’t even own a mower anymore.

I can’t afford the kids around here, half of them won’t even entertain the idea of doing it no matter the pay.